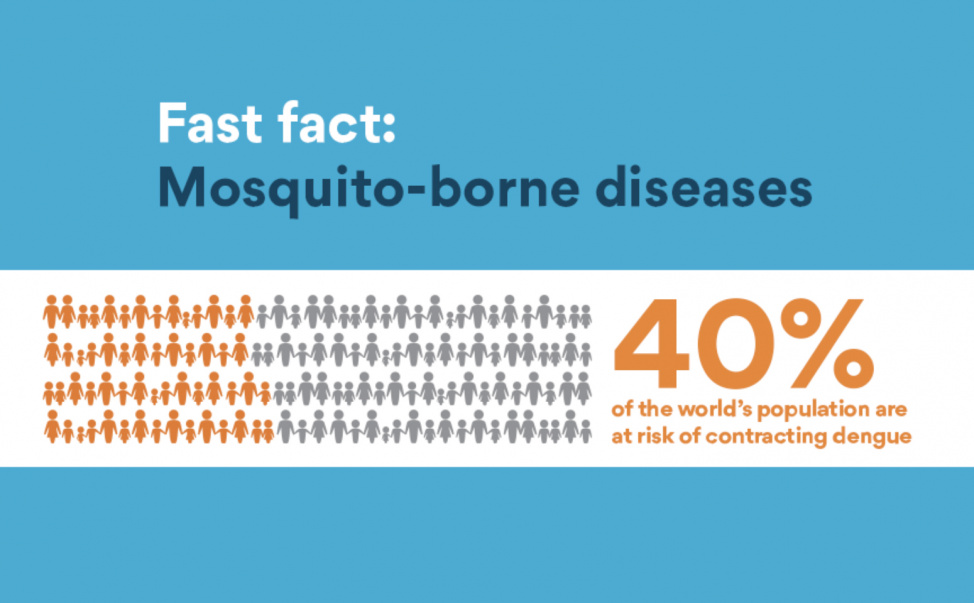 Did you know that 40% of the world's population are at risk of contracting dengue fever? Or that the Zika virus was first identified in Ugandan monkeys in 1947?

At the World Mosquito Program, we're helping to protect communities from dengue, Zika and chikungunya with our safe and natural Wolbachia method. Here are some fast facts about the mosquito-borne diseases we tackle.

More than 40 percent of the world’s population, in more than 100 countries are at risk of dengue infection. The most significant dengue epidemics in recent years have occurred in Southeast Asia, the Americas and the Western Pacific. Each year, an estimated 390 million dengue infections occur around the world. Of these, 500,000 cases develop into dengue haemorrhagic fever, a more severe form of the disease, which results in up to 25,000 deaths annually worldwide.

First identified in Ugandan monkeys in 1947, and in humans in 1952, the Zika virus was almost dormant for six decades. Global outbreaks in 2015 were recorded in Africa, the Americas, Asia and the Pacific, with Brazil reporting an association between Zika virus infection during pregnancy and microcephaly and Guillain-Barré Syndrome. Zika has continued to spread geographically where Aedes mosquitoes are present, with 84 countries reporting infections.

Since 2015, more than ½ million suspected cases of Zika have been reported, with 3,521 recorded cases of congenital brain abnormalities associated with Zika. There is no vaccine or treatment for Zika virus, other than rest and treating fever with common medicines.

First identified in an outbreak in Tanzania in 1952, chikungunya is a virus that is transmitted between humans by the Aedes aegypti mosquito. Chikungunya’s name is derived from a word in the Kimakonde language, meaning ‘to become contorted’, as the disease causes debilitating joint pain that induces a stooped appearance.

Chikungunya is most prevalent in Asia, Africa and India. However, in 2015, there was a large outbreak across the Americas, with over 1,379,788 suspected cases of chikungunya recorded in the Caribbean Islands, Latin America, and the United States of America. More than 190 deaths were also attributed to this disease during the same period. There is no specific antiviral drug treatment or vaccine for chikungunya and symptoms can last from months to years.

The WMP uses a uniquely self-sustaining method that does not pose risk to existing ecosystems and has the potential to transform the global fight against life-threatening viral diseases.

The World Mosquito Program’s approach has widespread support from communities, governments and regulators. The WMP is now working to make our approach more affordable and effective for use in at-risk communities around the world.