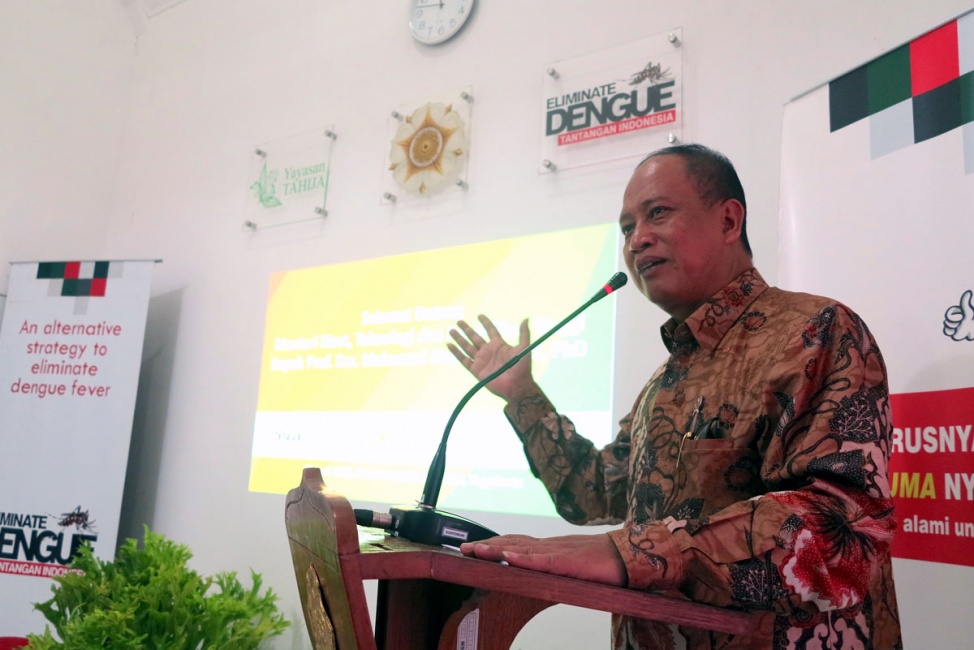 Indonesian Minister of Research, Technology and Higher Education, M. Nasir has visited Gadjah Mada University (UGM) to review results of the Eliminate Dengue Project (EDP) in Yogyakarta. The project is being implemented in the areas of Bantul and Sleman and aims to reduce transmission of dengue virus. The research is being implemented by the University’s Faculty of Medicine with financial support from the Tahija Foundation.

The project uses a naturally occurring bacterium called Wolbachia that reduces the development of dengue and other viruses inside Aedes aegypti mosquitoes. Project monitoring shows that a high percentage of mosquitoes in the research areas in Sleman and Bantul now carry the bacteria following the release of mosquitoes with Wolbachia in 2014-15.

The Minister was accompanied on his visit by the Director General for Strengthening Research and Development, the Rector of UGM, as well as local and district government officials.

"Having proved that mosquitoes with Wolbachia are able to survive in the Sleman and Bantul areas, the Eliminate Dengue Project plans to extend its research area in the city of Yogyakarta to prove the impact of this technology in reducing the number of dengue cases in the city", said Adi Utarini, research leader for EDP Yogyakarta.

During his visit, the Minister visited UGM research facilities including an insectary where mosquitoes with Wolbachia are reared and fed by human volunteers. The Minister also visited several neighbourhoods to learn about the experience of community members involved in the research.

“Wolbachia is a new technology and I think it is a tremendous breakthrough in the medical world today,” said the Minister during his visit. The Minister acknowledged the important role of research and development in addressing the health challenges faced by communities, and acknowledged Gadjah Madah University as setting a positive example in its work combatting dengue virus.